Not far from Jakarta's old town is a busy port where goods travel back and forth between Jakarta and the hundreds of islands of the coast of Java. We took a walk through the port last weekend, and got a pretty unique experience.

The merchant fleet based at the port is made up of dozens of wooden ships that look like they come out of a different era, and manned by what seemed to be hundreds of rough-looking--but friendly--men and their families. While the men are loading goods onto the fleet of ships, kids are running around laughing and swimming in the water.

After some lively bargaining with a fisherman by our host, we chartered his dinghy for a fifteen-minute ride around the port for about 8000 rupiah, or about 90 cents. He took us past all the docked ships and past the adjacent shanty village, which was filled with people mending their clothes, repairing roofs and boats, and just doing normal Sunday chores. The water here, like most everywhere in Jakarta, is highly polluted, and trash and human waste fill the port's bay, but the children swimming in it don't seem to care, which leaves me wondering if they have grown immune to the effects of the water, or are just used to symptoms. 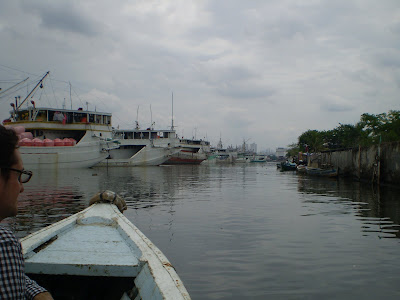 The boat trip left me amazed at human ingenuity and resourcefulness. The people in the village manage to make what seems to be a thriving village out of such meager resources. At the same time, I could not help but be saddened at the effects of water pollution on the area and its people by the huge population of Jakarta. 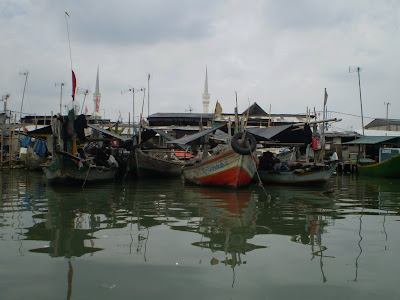 In a lot of ways, staying here in Jakarta reminds me of my time living in Florida. In both places, the days are hot and humid. Rain storms are frequent and torrential. And just like Florida, most buildings here are over air-conditioned, forcing me and most other people to wear a jacket while indoors, while sweating when out.


When I lived in Florida, I actually bought a space heater to use in my office so that I could be comfortable, and I wasn't the only one at my company to do so! Alas, I have no space heater here. But generally, the temperature and humidity are actually one of my favorite things about Jakarta, if only because it reminds me of Florida.

But there are so many ways that make the environment here nothing like Florida. It is almost never sunny here. The combination of clouds and smog make nearly every day the same white haze. I'm not sure I've seen a patch of blue sky yet during my time in Jakarta. The smell of burning trash is a constant here, but I was surprised to find that some of the American expats here actually enjoy the smell.

One of the strangest things here is the complete lack of seasons. Because the island of Java is so close to the equator, the days are the same length year round, and the temperature doesn't fluctuate much. Basically, everyday of the year, the high is 90 degrees F and the low is 75 degrees F.

One of the strangest things about Jakarta is the contrast between the wealthy and the average person. From what I can tell, there are really four classes of people here: the ultra-poor, the average, the upper-middle class, and the upper class. The ultra-poor live in the slums, barely eeking by by collecting rain water to drink and selling recycled trash.


The next group, the average, is the vast majority of the population. They live in the millions and millions of ramshackle houses that line the streets and alleyways of the city. They travel mostly by bus and motorcycle to get around the city. They fill every imaginable job here, as anywhere else. They are also the backbone of the service industry, acting as drivers, maids, cooks, restaurant personnel, etc. Perhaps because there is such are large workforce of low-wage workers, prices for food and services here are incredibly cheap. You can eat a good meal complete with multiple courses for less than three dollars or take a 30-minute taxi ride for two dollars. Even if you pull out all the stops at a really nice restaurant, you can eat for under $10.

The upper class are a small, but visible, part of the population, living in mansions on the same roads as the poor.

For a long time while in Jakarta, I thought those three groups were the entire population. Then we went to the mall and discovered the invisible middle class. The huge malls are packed with tons of well-dressed, affluent people shopping in stores that would not seem out of place in a high-end mall in an American city. Our hosts explained that the middle class seems invisible here because they are shuttled between their homes, their jobs, and the malls, and don't venture out much beyond that. The malls are hubs of social activity here, filled with bands playing live music, dozens and dozens of nice restaurants, TV shows being filmed, and trendy boutiques selling designer fashions.

For many years, Indonesia was a colony of the Dutch, and in Batavia, Jakarta's old city, that history is most apparent. On Sunday, we took a trip to Batavia to eat breakfast, visit some museums, and then eat brunch.

Unfortunately, Batavia has now become hugely run down, and most of the once beautiful buildings are in urgent need of repair before they completely collapse. Walking through old city made me really sad, because there is so much potential there. If this part of town was restored, it would be a huge tourist attraction, and would rival the European capitals for its architectural history.

Batavia is split in two by a canal, with traditional Dutch buildings lining the sides. The canal is crossed by a beautiful old bridge. But the buildings are falling apart, the bridge is rusting and near collapse, and the canal is filled with human waste and the smell is hard to bear.


But the old town is also home to a very vibrant scene of merchants, teenagers, families, and tourists all playing together in the streets. There are also a few museums, including one that featured the famous shadow puppets and gamelan, which I got to observe. Gamelan music has an amazing other-worldly sound, and the shadow puppets were fun to watch, though the plot was impossible to follow due to the language barrier.

We also got to eat brunch inside the beautiful Batavia Cafe. The cafe is another remnant of the Dutch colonial era, and being inside of it was exactly like you would expect a tropical colonial club house to be from the movies.

Trip to Indonesia, Part 6: The Botanical Gardens at Bogor

We decided to make use of the weekend and experience Indonesia outside of Jakarta, so some of the school's administrators took us out to a city called Bogor. Like everywhere else we go in Indonesia, we were taken their by our dedicated driver. All westerners in Jakarta, and seemingly most middle-class or wealthier individuals here, have their own full time driver, which goes along with the general trend here of having multiple assistants, but I will go into that in a future post.


Bogor is about an hour and a half drive from Jakarta on the highway. Unlike the normal roads in Jakarta, the toll highways are very reminiscent of highways in the western world, with cars travelling fast, and few motorcycles. If it were not for the rice paddies and jungle environment, it would be easy to think you were in the US while driving along them.

When we got to Bogor, we hired a tour guide to take us on a tour of the botanical gardens, which is also home to the Indonesian president's palace. The palace grounds are home to a herd of deer, apparently the descendants of a pair of deer gifted to Indonesia by Gandhi. The area immediately around the palace is also home to a collection of replicas of famous statues from Europe.

Our tour of the gardens took us past a huge collection of exotic trees, flowers, and other plants, including some of the tallest bamboo I have ever seen. The gardens are incredibly beautiful and a world away from the hustle, pollution, and crowds of Jakarta.

Some local university students who were learning English, politely asked us if they could interview us for a project. We all helped them out, answering their questions about America and which movie stars we liked the best. Not half an hour later, another group of students also approached us, and we gave another interview on camera. In some English class in Bogor, I am going to be famous!

At the end of our trek around the gardens, we relaxed in a cafe and drank delicious fruit juices. I had an amazing avocado juice, which of course reminded me of avocado milkshakes, my favorite (though hard-to-find) milkshake flavor. Well prepared fruit juices here seem to have the same place in the culture that cocktails do in western culture, probably due to the fact that most Muslims don't drink hard liquor.

Today, along with a group of students at the school I am here with, I visited Bintaro Lama, a slum in Jakarta. The students learned about how the people there are learning to filter their water to make it drinkable. They also learned how important it is to conserve water. My coworkers and I were invited to join the students and observe. There are multiple international aid agencies working in the slums to teach the residents how to properly dispose of waste, filter their water, and use proper hygiene to reduce the spread of disease.


The people in the slum live literally in the middle of a trash dump. There is no official trash collection in Jakarta, so people dump their trash wherever they can. The people there sort through the trash, looking for valuable things and recyclable materials as a (meager) source of income. Trash that doesn't end up here seems to just end up in piles or is just burnt, which accounts for the constant smell of burning trash here in Jakarta. 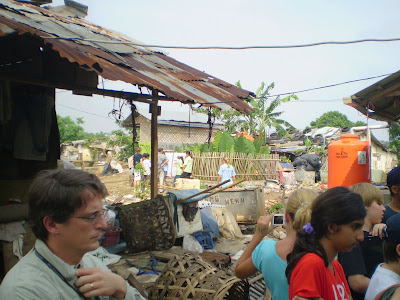