I mentioned to a few people that I have an awesome view from the roof of my building, and I have been asked for pictures, so here you go. I am on the second floor of a three-story building, so to get to my roof, I climb through a maze of stairs and paths in between buildings that really reminds me of action movies where two guys are chasing each other through back alleyways and jumping between buildings. San Francisco would be a great place to jump across rooftops for a chase scene... I would be surprised if they haven't filmed a movie doing that yet in the city. Anyone know of one? To bring out the garbage and recycling, I have to go through a similar maze to get to the basement, where the garbage collectors pick it up.

View of downtown from my roof: 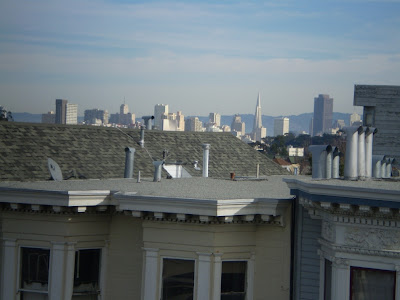 My neighborhood from my roof: 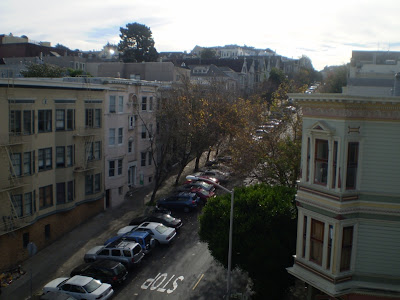 I checked out Union Square in downtown tonight, which is newly decked with Christmas decorations, masses of shoppers, and crazy traffic jams. Union Square is pretty much the retail hub of San Francisco, and everytime I go there, something interesting is happening. There is almost always some band playing interesting music on the corner of Geary and Powell, and tonight was no different-- with a trio comprised of crazy-funky bass, drums, and 6-year-old kid (I think the drummer's son) break dancing to the music. The last band I saw there was three guys doing experimental music with a didgeridoo.

By the way, I have learned that the best place to find a nice bathroom downtown without having to eat at a restaurant is the sixth floor of Macy's. I have only shared this knowledge with one other person so far, so let's keep it our little secret. Of course no trip to a shopping district the day after Thanksgiving is complete without some Christmas shopping, so I picked up some awesome things at... ha ha, it will have to stay a surprise! Pictures below... as always, click to enlarge.

Macy's in Union Square, with every window wreathed: 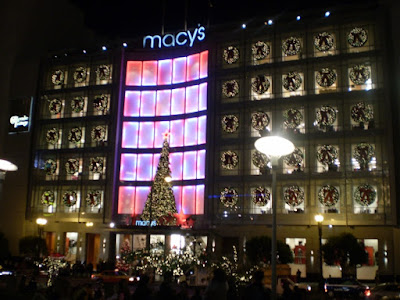 Saks Fifth Avenue and the huge Union Square Christmas tree, from the seventh floor of Macy's: 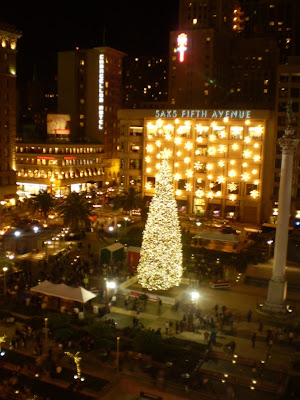 On Sunday I went on a hike through Buena Vista Park, which is about a five minute walk from my house. I love the park for it's tall hill, beautiful trees, outstanding views of the city, and it's ability to convince you that you are in the middle of the wilderness when you are only a few minutes walk from home. Here is an example of how wild the park looks (Who would think it's in the center of the city?): 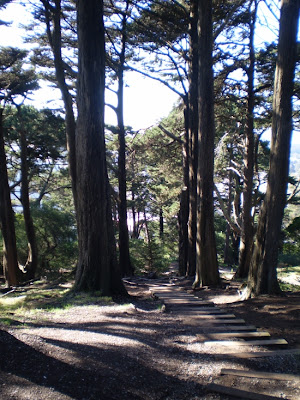 From the peak of the hill/mountain that the park centers around, you can see awesome views of nearly the whole city. Here's one from the eastern peak looking towards downtown, with the TransAmerica pyramid in the middle: 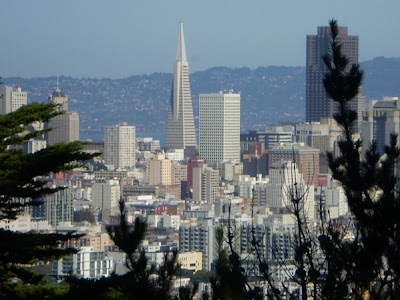 And of course, no view of the city is complete without the Golden Gate Bridge: 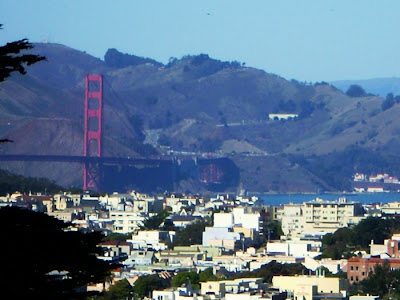 The park is a great place to relax or even get a workout, which is definitely possible since getting to the top requires climbing a couple hundred stairs and a good deal of steep paths. It's a great way to unwind from a week of stress at work and assorted other things. It is really close to my neighborhood of Haight-Ashbury, which I also really like. Tonight I hung out with my friend that I met at the laundromat of all places, just touring the sights, sounds, and smells (mostly from the free-wheeling pot culture here) of the neighborhood. We discovered that within two blocks of my house is a great bookstore and a cute little second-floor Thai restaurant with a significant vegetarian menu, always a big selling point to me!
2 comments:

My Room, Complete at Last

Well, I finally got my furniture delivered, so I was able to unpack my suitcases for the first time in a month. I got a TV and DVD player as well. My apartment doesn't have air conditioning, which is pretty much the standard in the city; it also does not have working heat-- which is most definitely not the standard in the city. So I bought a little electric oil heater for my room that so far seems to keep the room nice and cozy in the time between when I get home from work and when I go to bed.

Here is a panoramic view of my room. I definitely recommend that you click on it so that you can see it a little better:

My friends visiting from Tampa were back in San Francisco tonight, so we went to an amazing Indonesian restaurant in Nob Hill called Borobudur, where we had an amazing dinner and dessert. The desserts there were especially good-- Eric had a banana covered in chocolate syrup, condensed milk, and shredded cheddar cheese that, while it sounds disgusting, was really one of the best desserts I have ever tasted. My dessert was shredded ice over a bed of condensed milk and candied fruits, then covered in raspberry and chocolate syrup!

Afterwards we headed up to North Beach, also known as Little Italy. We watched a small band play on a street corner for a few minutes, then made our way to Vesuvio, the famous bar that was the home of the Beat culture of the late '50s and early '60s and hangout of Alan Ginsberg, Jack Kerouac, and Bob Dylan. They serve a drink called the Bohemian Coffee, which is brandy, amaretto, and a twist of lemon... not to everyone's taste, but I enjoyed it. On the side of the building is this mural: 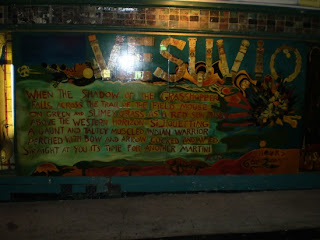 Welcome to the Caribbean 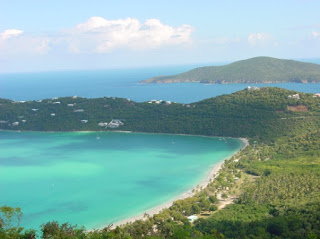 You might look at this picture and think, "Hmm... That doesn't look like San Francisco." No, it is a picture of St. Thomas in the Virgin Islands. The owners of my company told all of us today that they will be flying everyone in the company to the St. Thomas for a week, all expenses paid, in February. It's not quite a vacation, as we'll be expected to work six hours a day for five of the seven days we are there, but besides that small amount of time, we can live it up in the Carribean for a week! Needless to say, my company rocks.
2 comments:

Two friends from Tampa were passing through San Francisco this weekend-- my former bandmate from False Impression, Eric, and his wife Erin. we visited Japantown, Little Italy, Coit Tower, the Haight and ate tons of good food. See pictures of Coit Tower below.

View of Alcatraz from base of Coit Tower: 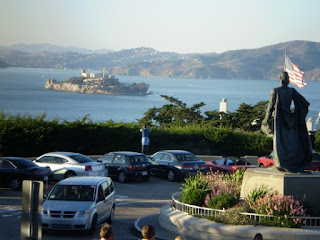 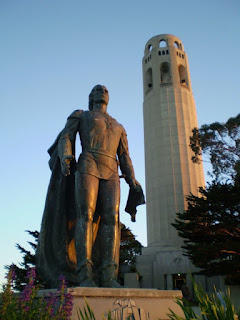 My Commute and First Play in the City

Here are two pictures of the sights during my commute home from work. I ride the N-Judah line, which is a subway half of the way, and above-ground light rail the other half. The thing that really makes this whole trip enjoyable is my iPod and podcasts, which for the uninitiated are basically radio programs that can be downloaded onto an iPod daily. 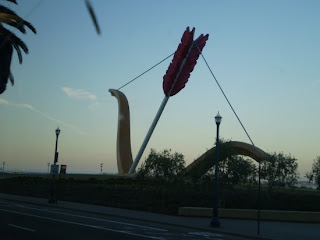 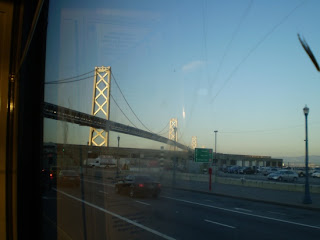 Last night I saw a play at the American Conservatory Theater in downtown San Francisco called The Rainmaker. My boss gave me two free tickets that he had but wasn't able to use, so I got really good tickets in an amazingly beautiful theatre for free. My date and I were sitting in the fifth row and could see every single expression on the actors faces-- definitely one of the best plays I have seen.
No comments: